It’s finally time for a new country! Are you guys ready for this? Drumroll, please…..

Azerbaijan! Now, I know a lot of you are probably thinking “what is that and why did you go there?” Well, the answer to that is simple. Azerbaijan is a former Soviet country with some pretty intense development and a relatively low amount of tourism. Since my University gave us a week long holiday (to…um…study), I decided to head on over there and see what was up.

I will tell you guys, when I returned and told my professor where I had been, she goes “Azerbaijan?” with a blank look on her face, and then after a long pause “….Borat?” (I actually spit out my drink laughing).

Now, flights to Azerbaijan are scarce, at best. And I’m sorry to inform you guys, but this time I truly could not find a decent flight using points to get there. Most flights connected either through Moscow or Istanbul and took upwards of 15 hours. However, every third day, Azerbaijan Airlines has a flight from London (and a return every 3rd day to Paris), so that’s what I ended up doing.

I spent a total of five nights, and Baku, the capital, happens to be home to some really spectacular hotels at really cheap prices (both points and dollar-wise). The J.W. Marriott Baku is one of only a few J.W. Marriotts (their flagship brand) in the world at a category 2 level, meaning it cost me just 40,000 Marriott points for my entire five night stay (Marriott gives 5th night free on award stays). In contrast, the total cost were I to pay to stay there would be just over $1,000.

For reference, the Chase Marriott rewards card comes with a 80,000 point sign up bonus after 3k spend in the first 3 months.

Since I’m an American Express Platinum Card member, I have gold status at Marriott, which meant that I received both a room upgrade and free executive lounge access for the duration of my stay. This was excellent, since breakfast and some excellent evening tapas and drinks were available on the daily. (As if I weren’t otherwise stuffing myself).

I’ve just got to tell you guys, I had an awesome time in Baku. As I said before, there are relatively low levels of tourism, which meant that most of the time I was delighted to find that I *wasn’t* paying the tourist tax I’ve found in nearly every other country I’ve been to. A cab across the city cost 5 bucks, regardless of the destination, so obviously I splurged just a bit. 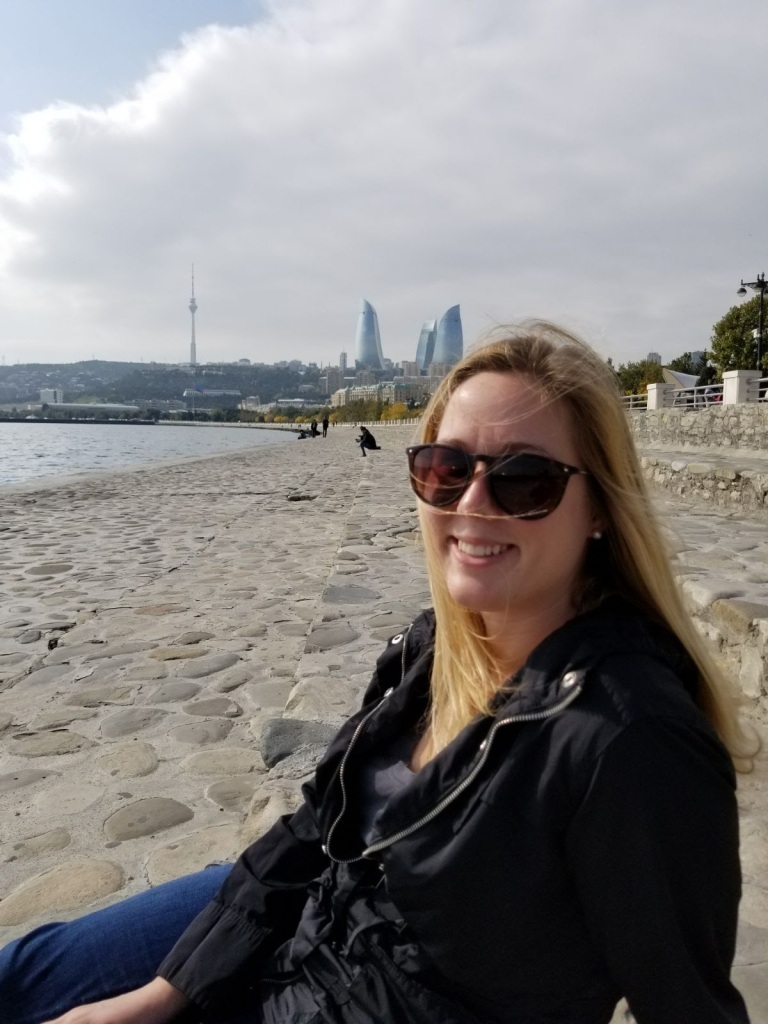 I was actually meeting Harrison in Baku, and for the first time in my life I trusted someone else to plan the trip. Yes, I know, it was terrifying. But I’ll give credit where it’s due, I had a lot of fun and traveling is 1000% less stressful when you don’t have to do it yourself.

Now since I was meeting him, not arriving with him, I had to figure out how to get to the hotel from the airport at 5am.

Do you guys know where this story is going?

Enter me, disheveled and angry after an overnight flight from London to Baku (6 hours too long), with my trusty backpack on and absolutely no idea how to navigate a Russian speaking country. I did, however, manage to take out some manat (their currency) in order to grab a cab, which promptly fell out of my pocket and no one told me about. Thanks, guys.

Just outside of the airport were dozens of cab drivers milling about, and I quickly found one who offered to take me to my hotel. I usually prefer to use Uber, since there’s a literal GPS track of where you’re going, but since that wasn’t an option I settled for the sketchy looking dude who came nearest to me first.

My first hint came when we walked out to his car, which was technically a taxi but also pretty run down and janky. Ok, fine, this is Azerbaijan.

So then I got into his car and off we went, me trying desperately to look at my phone in order to avoid talking and him chatting with just about…15 words of English. (Don’t you guys do that? Stare at your phone so you look really involved and unapproachable?)

Well, it didn’t work. Five minutes into what should have been a 30 minute drive, he pulls off the side of the freeway and insists that I move up front.

No thanks, I told him politely. He insisted again and no thanks I insisted back. Then I realized he wasn’t gonna move until I did, so into the front seat I went.

At this point he decides he’s a tour guide, so he’s driving 30mph on the freeway, weaving to and fro as he points out buildings. Ok, sure.

But then he pulls off again, asking for my phone number so he can give me a tour later. He then invites me back to his house.

And yes, I know, I could have given him a fake number. But then he called me! In the car! To make sure it worked! So thank goodness I didn’t.

Off he goes again, more pointing, more invites, etc etc. Then he turns to me and goes “you are a good girl, Carissa, you know that?”

And once more he pulls over. It’s now bright outside, since we are 45 minutes into our 30 minute journey. He wants to take a photo of me, you know, for the contact in his phone. I politely decline, and the same scenario plays out.

No, wait, it gets better. He then grabs my hand and shakes it, informing me once again that I am a good girl. We’re nearing the city center now, and I can almost see my hotel. Slower, slower, he drives, and he grabs my hand again.

He then declares that he loves me.

I ignore that bit and look very fixedly out the window, so he tries again, grabbing for my hand. He snags it and fucking kisses it, telling me he loves me again.

“What was that called?” He asks, mimicking the kiss he just did.

“It’s a kiss,” I tell him. I can see my hotel, just a couple hundred feet ahead, brightly lit and welcoming and full of no creepy men.

Finally, he stops, pulls up, and says,

“Can I kiss you?” while he reaches for my face.

I literally put my hand in front of his gross, creeping lips, and shoved him away. I then paid him (he tried to charge me extra!) and ran out of the cab.

– Carissa “At Least It Wasn’t a Proposal” Rawson