Since I’ve been bombarding you guys the last few days with different travel tips, I thought I’d go back a bit and talk about our trip to Japan last May. This trip was unique in a lot of ways, not the least because it was David’s first time leaving the US (as an adult. He had been to Mexico when he was a kid).

That meant that everything we were doing was going to be new and different and weird for him. Plus, y’know, it was Japan. Everything there is uncomfortably foreign.

Since this way last May, I actually didn’t have a ton of travel tricks up my sleeve. However, I had signed us up for British Airways Visa cards the year before, since I knew I’d be wanting to travel around. That meant our flights to and from Tokyo were free, which is a huge savings in and of itself.

I’m going to pause here and tout the awesomeness of Airbnb. Japan was our first time using the platform, and it saved us hundreds of dollars. It also lets you live like a local, which is something that everyone values (unless you’re in, like, Liberia). Since then, I’ve stayed in 13 different Airbnbs, with reservations for 11 more this year. What I’m saying is, these places can be great deals.

We spent a total of ten days in Japan and encountered some of the coolest, weirdest, stuff around, like Harajuku, where everything is violently pink and men with professional cameras take pictures of dozens of girls in school uniforms. Awkward.

Anyway, the first day we landed in Tokyo at about 5am, which meant that almost everything was closed, and we were exhausted from the flight over. Economy life sucks, guys. Our Airbnb host was really nice and let us head to our flat early, which meant we were able to shower and get ready before heading out for the day.

Since David is a giant nerd, our first flat was in Akihabara, home of all things geeky. We arrived super duper early, so we got a chance to walk through the city while everything was still asleep, which was really cool.

Our random walking took us over to the Tokyo Zoo, which we ended up wandering through for a few hours before heading over to the Gundam Cafe because we’re losers. It was awesome. 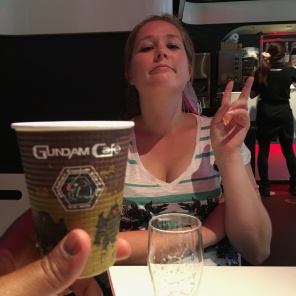 For our first night, we ended up eating at an Izakaya, with a dinner show from our host Mr. Yucky.

The show was…very Japanese. I mean that in the best way possible. We had traditional Japanese food, which meant a lot of mushrooms and fish. So basically I starved.

But the show. Ok, so Mr. Yucky asked each group of people to pick a country from a list that he had. When it came to my turn, I picked France. He disappeared into his back room for a minute before returning with an easel, a beret, and a piece of charcoal. French music began to play while he swiftly and silently began drawing a picture of me on his easel.

Then, having finished his art piece, he sat back for a minute and admired it before making out with it. A few seconds later, he picked it up, and with a flourish, dropped it down to his pants and began humping it.

Then he handed it to me!

-Carissa “Draw me like one of your French girls” Rawson